I recently went to the San Francisco Museum of Modern Art (SFMOMA), to visit their currrent exhibition “Jay DeFeo: A Retrospective,” which I’ve been wanting to see for a long time. While there, I did a compressed version of a Slow Art Day event with one of my friends; we spent about 15 minutes looking at DeFeo’s piece “The Rose,” and afterwards sat in the (excellent) SFMOMA cafe to discuss the work.

My familiarity with DeFeo’s work is fairly recent. I attend Mills College in Oakland, CA, where DeFeo taught for several years in the 1980s, so when the retrospective at SFMOMA went up it was heavily promoted on the Mills campus. In November, when the exhibition opened, I attended a lecture that art and music critic Greil Marcus gave at Mills called “Jay DeFeo and All That Jazz,” about the relationship between DeFeo’s art-making process and contemporary jazz music (Marcus was also a contributor to the exhibition catalogue accompanying the DeFeo retrospective). While the lecture was certainly eye-opening, when viewing the exhibition I found myself wishing that her work was entirely new to me, so that I could experience it without any preconceptions. 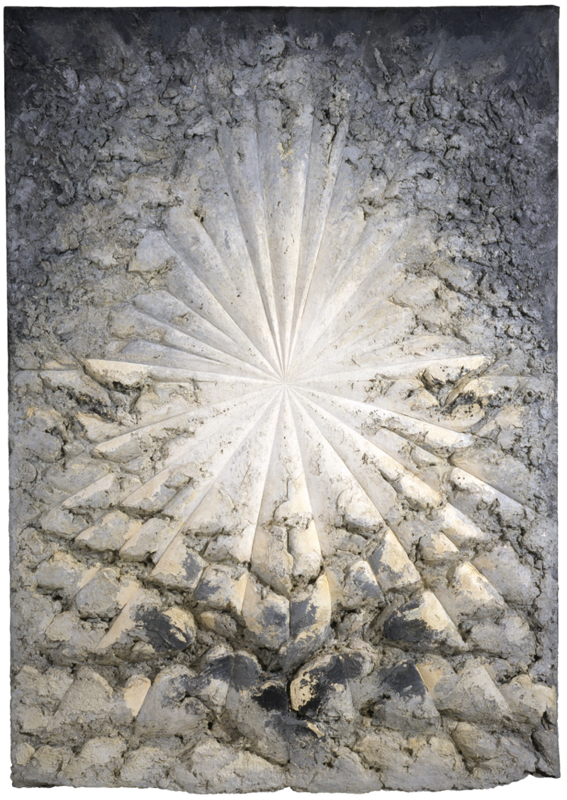 DeFeo’s piece “The Rose” is a colossus at more than 10 feet in height and weighing in at over a ton; the paint on its surface is more than a foot thick in places. DeFeo spent over seven years working on the painting but never considered it finished. Her work on the painting was interrupted in the 1960s when she was forced to move out of her apartment in San Francisco, where she had worked on the painting (according to Greil Marcus’ lecture, she was evicted because neighbors complained of her and her husband’s eccentricity). Her new apartment didn’t have space for such a large painting, so it went into storage for several years. When DeFeo was moving, a construction crew had to be called in to pry the painting from the walls and take it out of the building via a crane and the fire escape.

In the retrospective, “The Rose” is presented in such a way that it seems almost diminutive at first glance. Set apart from the rest of the exhibition in a sort of alcove, with unusually dim lighting, the staging is supposed to mimic how the work would have looked when in its original location, a wall in DeFeo’s apartment. From a distance, “The Rose” looks small and unimpressive, but up close, its sheer bulk is overwhelming. The many layers of paint that make up the work cause it to protrude so far out from the canvas that it appears to be free-standing, blurring the line between painting and sculpture. My only problem with the SFMOMA’s presentation of the work was that the separate room it was in prevented much freedom of movement around the work, so that I couldn’t view it from as many different angles as I would have liked (that didn’t seem to discourage creativity among other viewers though – a museum guard told me that she had once seen a man try to stand on his head to see the painting from a different perspective).

Even after spending over 15 minutes with the painting, I’m still not sure what to make of it. As the most famous of DeFeo’s works, it was the one that most of the viewers were flocking to, and they all seemed to be suffering from the syndrome that occurs when you encounter any famous work of art in a museum, where you’re drawn to a work of art simply because it’s famous, and not for anything inherent in the piece itself (I call this the Mona Lisa syndrome). I felt the same way at first too, excited to be seeing the one work of DeFeo’s that is regularly featured in art history textbooks. But after a few minutes it made me sad more than anything else. The layers of cracked and fractured paint dividing the painting, once white but turned gray and black in places, brought to mind the ruins of a once-great cathedral. I couldn’t help but think of how DeFeo had spent over seven years of her life working on “The Rose,” and she never even got to finish it. She also didn’t live to see the work find fame – it was exhibited only once during her lifetime, at the Pasadena Museum of Art, and subsequently bought by the San Francisco Art Institute, where it was installed in the wall of a conference room. There, it sustained such damage that a false wall was built to cover the painting, obscuring it from view. In the 1990s, a decade after DeFeo’s death, it was bought and restored by the Whitney Museum in New York.

I thought it was apt to do a slow art viewing experience with “The Rose” given the extraordinary amount of time that DeFeo devoted to it. However, this was an instance where spending 15 minutes looking at a single work of art didn’t feel like enough time. I kept thinking about how DeFeo spent every day for seven years in front of this piece, and so it felt like a disservice in a way for me to only spend 10 or 15 minutes. I’m planning on returning to the exhibition soon, to spend more time with “The Rose” but also with the other works in the exhibition, a couple of which caught my eye. If you’re around San Francisco (the retrospective will also be opening at the Whitney in late February), I highly recommend checking it out to form your own impression of DeFeo’s work.

[Jay DeFeo’s The Rose (1958-66) was viewed in the San Francisco Museum of Modern Art’s exhibition Jay DeFeo: A Retrospective.]