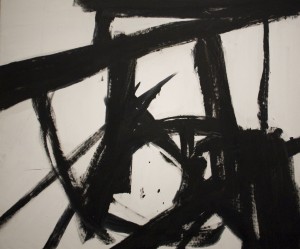 Meandering the sparsely populated gallery on a normal Tuesday afternoon, it is nearly impossible to not be transfixed towards Franz Kline’s Turin (1960). As I draw closer to the magnetic canvas, it’s massive presence causes Turin to loom over, dwarfing me with impressive size. My first instinct in the face of such a monolithic painting is to scatter to any corner of the exhibit. Instead, I decide to stand my ground in the front of the gallery. This bolstering of will initiated by the intimidating strokes anchors my legs directly in front of the canvas. Perhaps my initial reaction can be distilled with a measured and slow look.

Within the first minute I am already wavering.  The raw, impressive energy of Turin is overwhelming head on. I am used to standing off on the side, not facing a work so directly. I cannot afford to be passive, however, I have to engage with what I am staring down before me. Instead of an impartial sweeping glance across the room, I find myself fixated. Here, I am held captive.

I am drawn first towards the thick, heavy vortex of black paint. All I see is black, as my eyes are downcast towards the frenetic yet firm grip of the brushstrokes. The distracting murmurs of the gallery’s other inhabitants echoing in the spacious gallery begin to dissipate. As far as I am concerned, I am in solitude with Turin.

I become more preoccupied with trying to discern how brooding columns of pigment can pair so well with fibrous sweeping gestures. I follow the strong, deliberate beams outward until I must step back and shift my weight in order to follow their lead. As the concentrated black swirl leads out in angular, cantilevered bars, I exit the vortex that had first captured me, my eyes watching the articulate arching reaching outward. I soon realize that Turin, in fact, has an abundance of white space.

By standing my ground, I have the revelation that Turin exists in a state of contradictions. It appears both dark and light, crowded and sparse, belabored and spontaneous. I realize that there is a wealth of information behind it’s initial intimidating stature. With this reveal, it becomes obvious that Kline’s abstraction is a well-crafted process revealing a plethora of competing elements.

I step away with satisfaction, having spent a good deal of time exploring the varied and numbered passageways within Turin. Without stopping and looking unflinchingly at the canvas, I doubt I would have been able to fully appreciate Turin’s dynamism, or been able to see the fluidity in his taut lines.