Christine Campana from the Art Gallery of Algoma wrote a great summary of her Slow Art Day experience from just over a month ago: 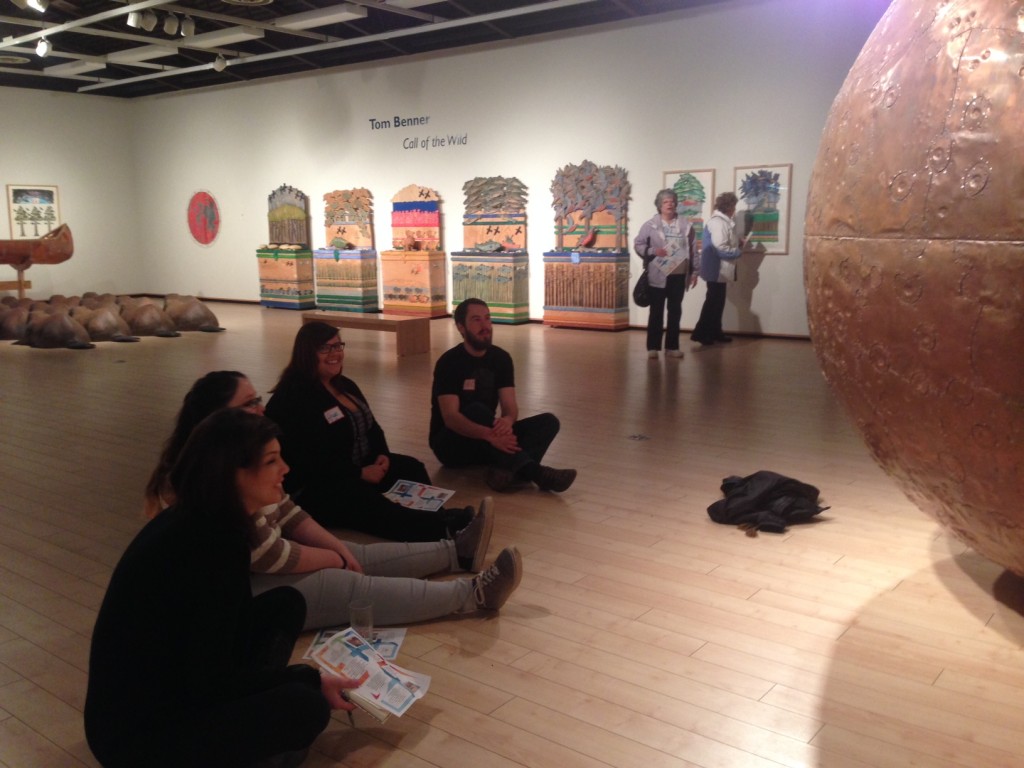 Walking through the Art Gallery of Algoma during Slow Art Day leisurely examining 5 pieces of art was a worthwhile experience; not only was I given the chance to really pay attention to aspects of the works that I had previously not taken the time to truly appreciate, but the experience allowed me to converse with others and discover their interpretations.

The Art Gallery of Algoma put together a handout with photographs and descriptions of the pieces chosen. The pieces were picked by 5 different locals, ranging from artists, to art advocates, to novices, who each discovered something new by engaging with the pieces for longer periods of time than they normally would have.

Regarding the Tom Benner fibreglass, paint, leather, and mixed media piece titled “African Wild Asses,” Teddy Syrette explained in his description that he chose the piece because “it is almost like it’s a grouping of animals, they’re trying to get some place better . . .They’re all different but all collective.”  As I stood at different points around the piece with various participants, it definitely became clear in how many ways this piece could be seen.

With a shorter look at the piece, one participant revealed that she found the similarities of five synthetic animals moving in the same direction to be almost unnatural, while through a longer period of observation, another participant began to notice the differences in the animals and began to assign them their roles in the pack. She also began to see a slight shift in the direction of one of the sculptures that suggested they were starting to veer off course. Her creation of a story where each of five very similar animals had a particular character based on their visual features was only possible by really taking the time to notice these distinctions.
While “African Wild Asses” was analyzed through observing the animals carefully, “A Landscape” was enjoyed thoughtfully looking up at the piece from the floor. The arts advocate who had chosen the piece stated that she had done so because the large sphere, the focal point of the piece, “draws me in.” The wood and copper work included a total of three pieces, but, as the participant who had chosen the piece also felt, people could not help but be absorbed and overwhelmed by the immensity and beauty of the copper orb.

While hints of colour were visible within the oxidized copper of “A Landscape”, colour was far more pronounced in Gabriela Benitez’ “Rojo y Blanco.” In mine as well as others’ opinions, the vivid greens and reds overlaid with white chaotic lines released emotion which was only multiplied the longer the work was viewed.

Each of these pieces as well as the other works chosen, including a multimedia piece by Cheryl L’Hirondelle and another sculpture by Tom Benner, gave me the chance to pose and answer questions and see art from new (and many more) angles. As I walked through the gallery, I was certainly able to appreciate the value of looking at art slowly and engaging with others to discover some amazing insights I never would have thought of on my own.  Taking my time with art was a positive and rewarding experience, however, I was not so successful with the food; I had a hard time treating the slow lunch served after with the same patience–it was just too delicious!