As we prepare for Slow Art Day 2020, we have finished our 2019 report with host summaries from around the world.

We also continued to receive great press attention including from The BBC, The Art Newspaper, Smithsonian Magazine, and many local and regional offline and online newspapers, radio, and television.

Again, to read the full report including summaries from around the world, download our 2019 Annual Report here (PDF-14MB).

We look forward to celebrating our 10th anniversary with you in 2020. Thank you for all you have done to make possible the 1,500 total Slow Art Day events over the years on every continent and land mass except for Greenland (who is up for Greenland this year?).

If you haven’t already, you can register for 2020 participation via this link: https://www.slowartday.com/be-a-host 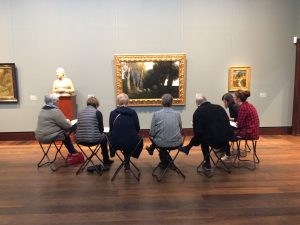 “We looked at three different works of art by Lorrain, Chagall and Böcklin. To connect deeper with the artwork and ourselves I guided the group with reflective questions like ‘What in the artwork is drawing your attention?’ or ‘How did this situation came about and how could it develop?’. This encouraged the participants to deeply engage with what they saw. After a silent period of looking we shared our thoughts and perceptions. Listening to what the others saw, opened a whole new perspective to the artwork but also to the way of looking at art. To look slowly and engage oneself with the art is a truly inspiring experience.”

Host Rachael Nease at the deCordova Sculpture Park and Museum in Lincoln, MA, writes of their Slow Art Day 2017 experience:

This was the first year that deCordova Sculpture Park and Museum decided to take part in the event, but it will not be our last!
Our museum guide, Judith Scott, led some close-looking of both painted and sculptural artworks featured in our Expanding Abstraction: New England Women Painters, 1950 to Now exhibition and our permanent sculpture park collection. The sculptural piece was a brave choice – a male nude formed in cast iron that has been intentionally allowed to age over the years with a rust patina. One of our Slow Art participants admitted he had been coming to the museum and avoiding this sculpture for years, but the opportunity to look closely and discuss the object had given him a new appreciation for the sculpture.
The photo is of part of the group with Maud Morgan’s Gold Coast II. Taking time to really look at this seemingly simple painting, our visitors were surprised at the details they were able to pick out and discuss – we actually had to pull them away to move on to the sculpture!
At the conclusion of the event, one of our participants summed up her experience, telling us that she had never thought to slow down to appreciate the art that she loved and often visited. The experience, she said, will change the way she looks and experiences artworks. 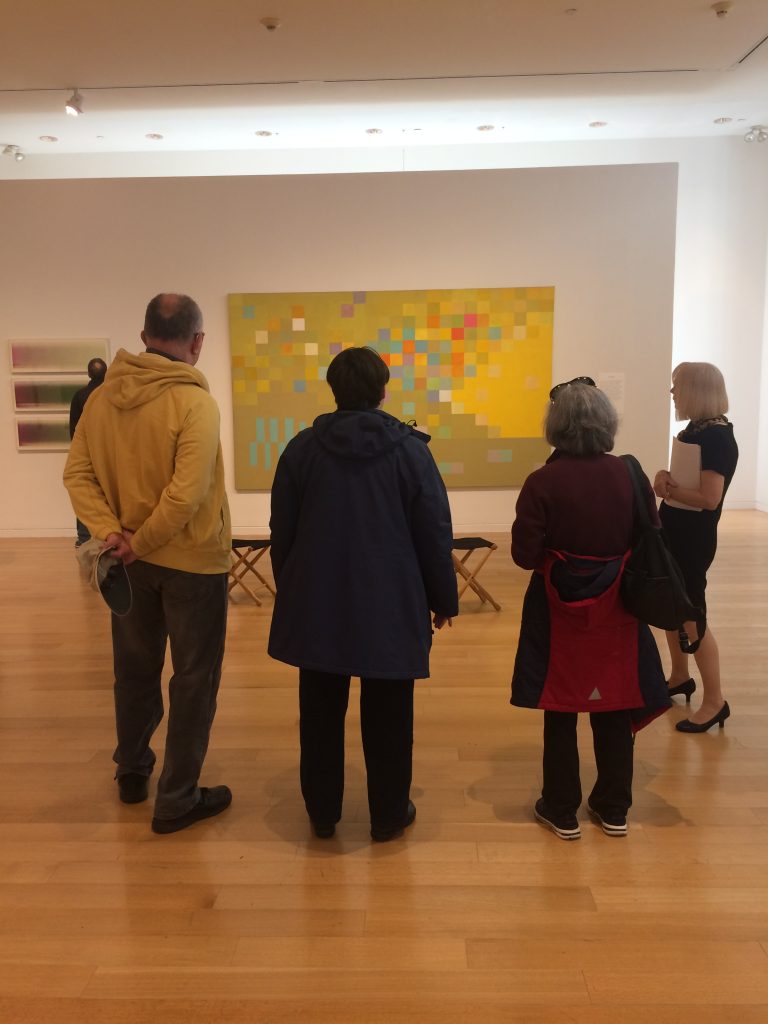 “We regularly co-organize original creative and artistic visits to street art destinations in Paris. Isabelle’s specialty is Wutao (an energetic art form), art history and a focused knowledge on street art; she is used to inviting people of all ages to connect with their body, emotions, sensations and creativity, which leads to a new way of discovering art and life.
As both a dancer-choreographer and a visual artist, I have created my own concept, La Matière en Mouvement, based on the relationship between dance and visual arts. I explore the interactivity between artists, works of art, public/visitors, time and space(s) though performances and happenings in everyday life locations. The purpose of La Matière en Mouvement is to invite us to connect to all our sensations and to the feelings of freedom, happiness and wellbeing in order to create a work of art with our bodies (living sculpture postures and improvised dancing moves) and/or with the material (drawing, painting, sculpture, photography, video).
Regarding our Slow Art Day 2017 event in Paris, we had 12 participants.
The content was:
Isabelle and I are very happy. We intend to organize a new event with Upstreet 13 for Slow Art Day 2018.” 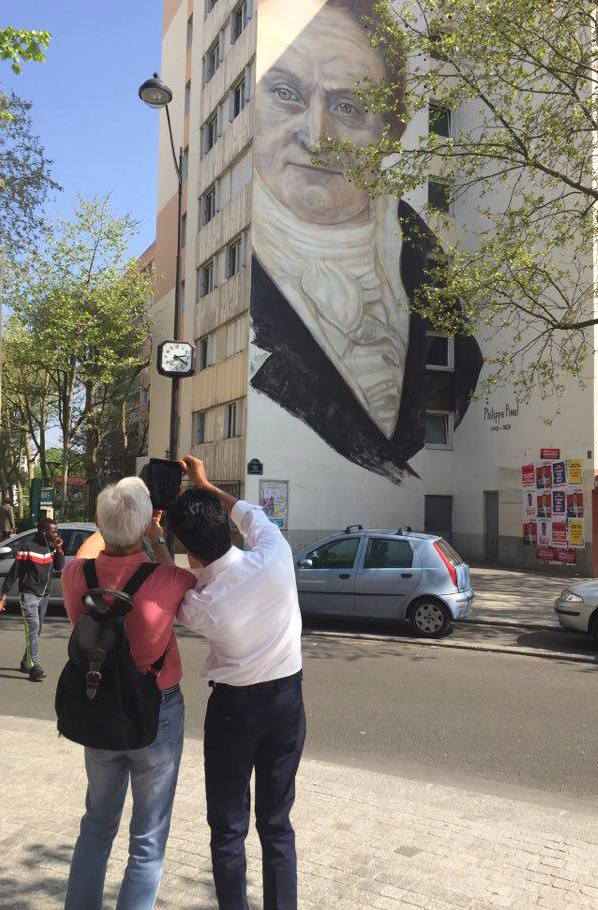 Slow looking with Upstreet 13 in Paris

“YSP launched Mindful Moments on Slow Art Day, inviting 10 people to a private one hour viewing of Tony Cragg’s A Rare Category of Objects. Participants were invited to focus their attention on five specially selected sculptures and given cards with guidance and suggestions for mindful viewing – they were encouraged to close their eyes on arrival and before departing from each art work, allowing time for the experience to settle, perhaps noticing sensations in their body to help ground them in the moment.

Invitations for ways to view the work included, “Notice the edges of the piece. Take time to trace the edges with your eyes. Move very close to the piece and look slowly. Move further away – what do you see now?”

The atmosphere in the gallery was tranquil, yet there was a sense of intent focus and quiet energy. People moved reverentially around the space, but felt comfortable to lie on the floor, crawl around and under sculptures, move their bodies in response to the shapes.

This was followed with a delicious breakfast of tea coffee and pastries in the restaurant and conversation about the experience.”

“Slow Art Day at YSP was truly the best way to start the weekend. We’re spending the day here, and we will do it differently after that.”

“If I’d gone on a normal visit I wouldn’t have even looked at that sculpture. Now I feel a real connection to it and it’s my favourite one.”

“All my ideas about the work changed as I looked at it longer.”

“A great privilege to have this private experience with a sculpture.” 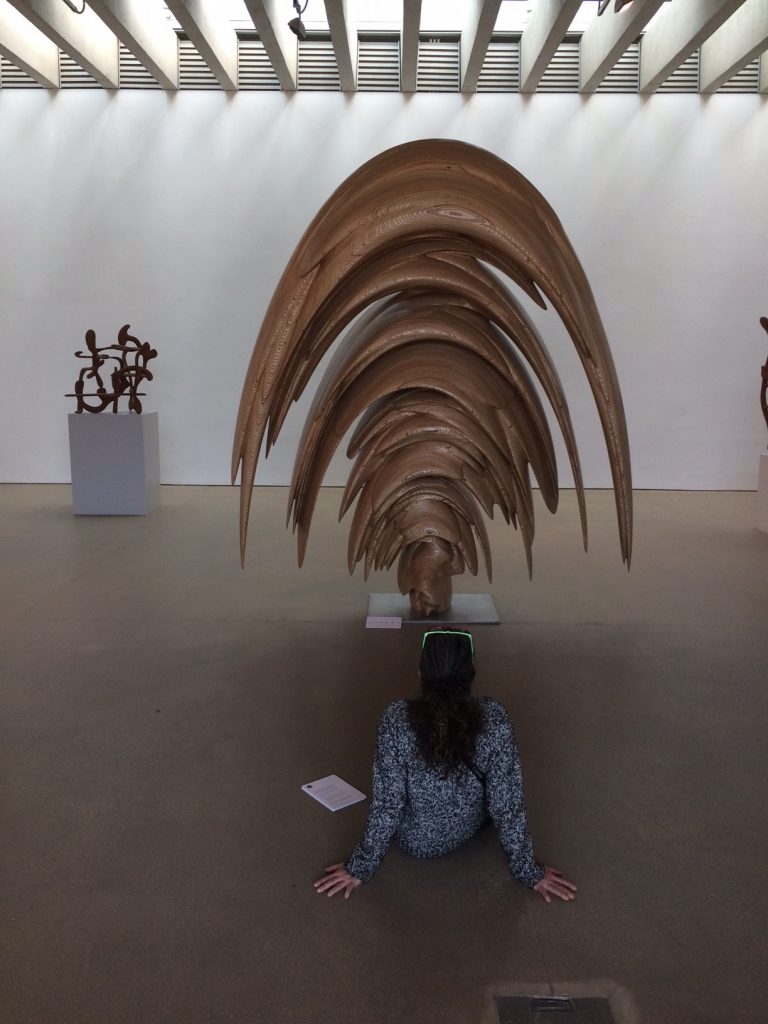 Host Pauliina Nyqvist of the Wäinö Aaltonen Museum of Art in Turku, Finland writes of their Slow Art Day 2017 experience:

“Our Slow Art Day went well, even though there was only few attendants. We took a close look at a small selection of sculptures by iconic Finnish artist Wäinö Aaltonen and had some eye-opening discussions. We added our own touch to the Slow Art Day program by giving the option to draw the sculptures while looking. That appeared to be a very good idea.” 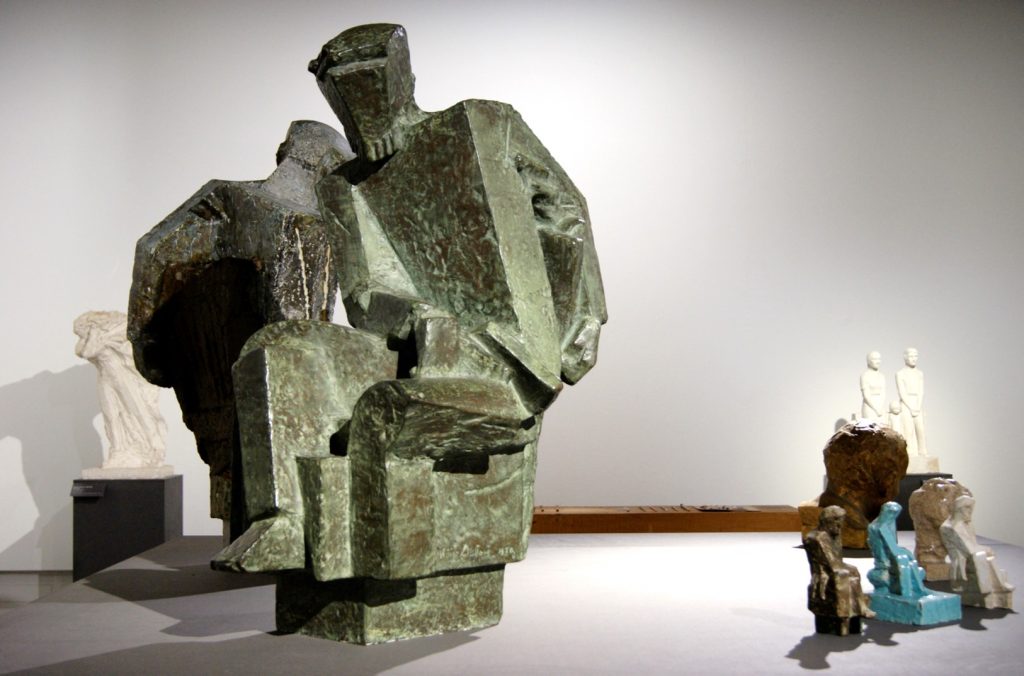 We just wrapped up our first Slow Art Day—it was great! Our new docent class did a great job as they took several guests around to discuss the works of art. So many people left saying, “I would have never noticed that before,” or “I really enjoyed just taking my time.”  It was a hit and we so look forward to doing this every year!

Host Joan Lueth at FQ Projects gallery (and the host of this year’s only Slow Art Day event in China) writes of their slow looking experience this year:

Checking in from Shanghai after another fabulous Slow Art Day experience! We gathered in an old neighborhood of fast disappearing houses, due to rapid development, in a typical 1920s Shanghai lane house now converted into FQProjects gallery featuring emerging artists. Viewing the works of Shanghai artist Wang DaWei, we entered into his world of mixed media paintings reflecting on living on the outside of community in a new neighborhood. As one participant Raymond Bu said, ‘I feel a happiness about the art even though the people seem alone. I grew up in a house just like this until I was 15 years old. It brings nostalgia to me inside the house and inside the paintings’. Thanks for another terrific event in a special and unique location! Best of luck from Shanghai to all those waking up to their Slow Art Day!  Zhi Yi (best wishes!) 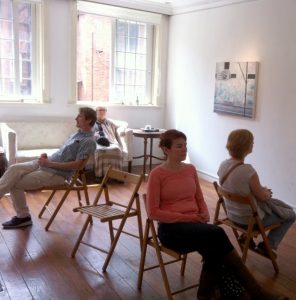 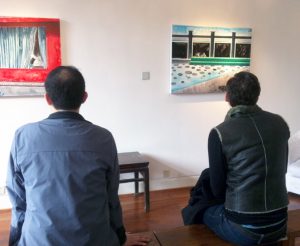 I hosted an event at the Rietberg Museum in Zürich, Switzerland. The Rietberg is a “world art” museum, meaning non-European. Many participants said they especially appreciated the cross-cultural aspect.

Nearly everyone said they wished there would be more frequent Slow Art
events.

The most difficult part was the discussion: I chose the museum’s cafe, which has only small tables that can’t be easily rearranged so we were divided into small groups of four. I had hoped we could eat and converse on the museum’s terrace, at tables that we could have moved around to accommodate whatever size turnout. However, this is Zürich, and it poured rain. So, I would do this part differently in the future.

I chose the five pieces for variety: big, small, simple, complex, colorful, monochromatic, painting, sculpture, ceramic, in different locations throughout the museum (which is in several small buildings) and no repeat of a culture. A few asked me whether there was a theme, and most did not realize or understand that I had chosen the art: they thought that (somehow!) the Slow Art Day organization itself chose the art at all locations. Several noted that they especially liked the variety, the moving around, and the freedom to just look at those pieces without feeling compelled to look at anything else.

I totally enjoyed hosting this event, and appreciate the Slow Art Day organization for making it possible for anyone to host. The participants were, for me, a fun combination of people I know personally and complete strangers who discovered it through Eventbrite. Most of all, I appreciate the concept: slow down and absorb what you see.

Thanks again to all who made this a world-wide event,
Margaret

“Beyond slow looking we had no rules. We weren’t looking for anything, we didn’t have to like what we saw, there would be no wrong way to look or right way either.“

The group felt gratified knowing that “while our conversation was specific and personal,” 270+ venues across the world were having their own “attentive and unmediated” conversations about art. As the fast-paced antics of New York City beckoned at the close of the event, the participants left gratified with a new awakening to the benefits of slow looking.

Feeling inspired?
Don’t forget it’s never too early to sign up as a host or to participate in a 2014 venue near you.

Was your Slow Art Day event similarly invigorating? Share your experiences below in the comments!