Because of Covid-19, the McMaster Museum of Art in Hamilton, Ontario, Canada, hosted their seventh Slow Art Day as a virtual “slow reveal” event via their Instagram account @macmuseum.

Over a 90 minute period, nine detailed image fragments of Franklin Carmichael’s Spring Snow were published in 10-minute intervals on the museum’s Instagram feed, with the full artwork being revealed at the end.

Participants were invited to reflect on each of the detailed images as they were posted, and a discussion was facilitated in the caption to each post, and in the McMaster Instagram stories.

The Instagram stories for the McMaster Slow Art Day event had almost 200 views, and the posts themselves were seen by 350 people. A recap of the event is available for anyone who would like to recreate it at home.

When we started Slow Art Day 10 years ago, we were adamant that all the sessions be *offline* in the museums. We Internet veterans were happy to use the Internet to promote and support Slow Art Day but we wanted to use the web in the service of sending more people into real spaces. This year, however, we had no choice and are delighted to see the creative ways museums like the McMaster hosted virtual events for our 10th anniversary Slow Art Day.

We look forward – we hope – to the eighth McMaster Museum of Art’s Slow Art Day in their actual museum in 2021.

The virtual event highlighted four artworks from the Winter 2020 exhibitions:

Laura Demers, TD Curator of Education and Outreach Fellow, wrote a series of prompts that were posted online, alongside close-up photos highlighting specific details in the four artworks. Viewers across the globe were invited to respond to these prompts, either by sharing their impressions in writing (stories, lists, poems, short paragraphs, or social media comments) or by engaging in small multi-sensory activities at home.

The downloadable PDF from the event is permanently posted on their website for participants to continue to use at their own pace.

Laura mentioned that the event was so well received that it produced over 350 new Instagram followers, and thousands of likes from the community across all of their social media accounts.

Josh Heuman, Curator of Education & Public Programs at The Power Plant, writes that:

“In little ways, this COVID-19 pandemic is pushing us to re-think how we might use online platforms to think beyond the four walls of The Power Plant.”

We are encouraged by the creative responses to the challenge of hosting virtual events during these difficult times, and look forward to The Power Plant’s continued participation in 2021.

Next, the visitors were encouraged to take time viewing the three different components of Young & Giroux’s work in the gallery – the film screen, the mechanical sculpture, and an LED sign displaying the texts the participants had read earlier in the session.

We love to hear how organizations promote slow looking across diverse media, and look forward to seeing what InterAccess has in store for Slow Art Day 2020.

She then led a group discussion about the participants’ perceptions of slow looking. They discussed their personal connections with the artworks, which revealed startling similarities.

On Wednesday, July 3, 2019, The Power Plant also hosted Phil Terry, the founder of Slow Art Day, for a roundtable discussion with Toronto-area organizations that have hosted, or aspire to host, their own Slow Art Day. Each of the educators and curators talked about their designs for Slow Art Day, and what worked and what did not.

The Power Plant’s new TD Fellow, Laura Demers, will be ready to guide the next Slow Art Day on Saturday 4, April 2020, and we look forward to seeing what she has in store for the event.

OCAD University Gallery in Toronto hosted a successful second Slow Art Day in 2019. They reported that both participants and guides alike enjoyed slowing down.

Both guides and participants were encouraged to look and then talk about the artworks. They made several discoveries.

First, they found how each person’s way of seeing the world affected the experience. In other words, slowing down helped them see not only the art but themselves and each other in new ways.

They also learned how the art of slow looking can reveal even the smallest details and “nuances” that seem invisible at first and then almost magically appear the longer you look.

“In the quietness of looking, our eyes wandered and caught the tiniest details in hopes of deciphering hidden nuances.”

Valerie Arntzen, assemblage artist at AMP Studio in Vancouver, Canada, invited Slow Art Day 2019 participants to look at one of two pieces of her artwork slowly and then discuss the experience.

Not surprisingly, Valerie found — as Marcel Duchamp once said — that the “spectator completes the work of the artist.” In other words, the Slow Art Day participants were active co-creators of Valerie’s art bringing new and varied meaning and perspective.

It’s great to have artists and “spectators” directly interact via slow looking. In fact, we invite artists all over the world to open up their studios for Slow Art Day and hope that more will follow Valerie’s example next year.

The Canadian Clay & Glass Gallery in Waterloo, Ontario, Canada participated in their first Slow Art Day in 2019 by inviting visitors to slow down with ceramics, glass and mixed media from Canadian artists.

After one hour of slow looking, visitors gathered for 30 minutes to discuss their observations about the material and meaning of the works, including the hidden qualities and stories they discovered.

According to The Canadian Clay & Glass Gallery, one participant said it was “exhilarating to meet new people and share so many diverse perspectives about the artwork.”

We look forward to the Canadian Clay & Glass Gallery’s participation again in 2020!

This year marked the first Slow Art Day at the Kelowna Art Gallery in Kelowna, BC, Canada. Alison Trim, visual artist and graduate student in the MFA program at UBCO in Kelowna, along with the Gallery’s Public Programming Assistant Ryan Trafananko together hosted an afternoon that combined art exploration and information about the Poetics of Space exhibition.

Trim and Trafanako reported that many participants loved learning the art of slowing down and fully experiencing art — especially with this exhibition, which focused on the experience, creation, and dynamics of space.

We were very happy to hear that their first Slow Art Day went well, and are looking forward to Kelowna Art Gallery’s participation in 2020. 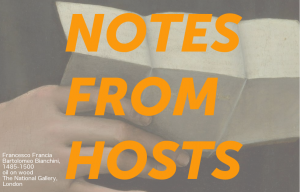 Stick It To the TOM on Slow Art Day!

On April 12th“Stick it to the TOM on Slow Art Day” visitors will be provided with post it notes and pencils and we’ll be asking you to write down your responses to the works on view and let us know what you think of them. Following the model set up in the Convergence and Look What We Have! exhibitions, these responses will be posted on the walls next to the artworks so that other people can read and discover what moved/inspired/challenged/provoked someone else in their interaction with the art.

We will also be offering a virtual platform for those who cannot physically visit the TOM on April 12th. On that day we will be posting images from our collection and inviting people to “Stick it to the TOM on Slow Art Day” by posting their responses to the images on our Facebook page.  We’ll be tweeting some of the post it note responses on our Twitter page with the hashtags #StickItToTheTOM and #SlowArtDay if you want to follow the dialogue there as well. 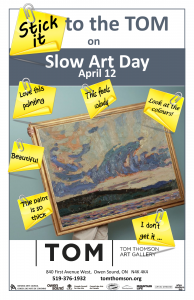 The TOM is a regional art centre and INTERNATIONAL cultural attraction dedicated to the innovative spirit of landscape artist and Canadian icon, Tom Thomson. The TOM celebrates excellence in the visual arts locally, nationally and internationally, through exhibitions of historical and contemporary art, education programs and the enrichment and interpretation of its significant permanent collection. We have one of the largest collections of Tom Thomson’s work (74 pieces including artifacts), over 90 pieces by the Group of Seven, 42 pieces by world renowned photographer Edward Burtynsky as well as work by Emily Carr, John Hartman and a substantial collection of work by women and First Nation artists. We look to engage our immediate and broader audience in meaningful ways through our exhibitions and onsite and offsite programs. The TOM is the region’s main disseminator of contemporary art.  Through excellent exhibitions, publications, and engaging social media platforms and education programs, the Gallery provides a unique experience for its audiences.

So on April 12, come down to the Gallery or visit us online and tell us what you think!

Admission to the TOM is by donation.
There’s always something going on at the TOM!